Opens in a new window

College varsity esports have been around since 2014, and have been steadily growing in popularity. ESPN reports that there are now more than 125 college esports programs in the U.S. But the quality of a college’s esports program can vary widely, both in terms of the sports offered and the degree of participation required. We’ve reviewed the best colleges for varsity esports so you can choose the one that’s right for you.

Video games have long been a popular pastime in college dorms, but varsity esports programs take things to the next level, treating them as seriously as traditional sports. If esports are your thing, some schools offer scholarships and other incentives to attract the best players.

The specific esports that a college offers can vary, but may include games like League of Legends, Madden, Overwatch, and Fortnite. In addition to arranging for competitions between schools, varsity esports programs can give you access to the resources and equipment you need to stay on top of your game.

When comparing college varsity esports programs, it’s important to consider what level of commitment they entail. You might be expected to travel to regional tournaments to compete, just as you would with any other varsity sport.

The best college esports programs can serve as a stepping stone to a professional career in gaming or pair well with an academic program related to esports, such as a degree in video game development or art design.

To put together our list of the best college varsity esports programs, we reviewed nearly two dozen of the best programs in the country and narrowed them down to the top 20. We relied primarily on the information available on each school’s website, taking into account the esports that are offered and whether or not the college is accredited. 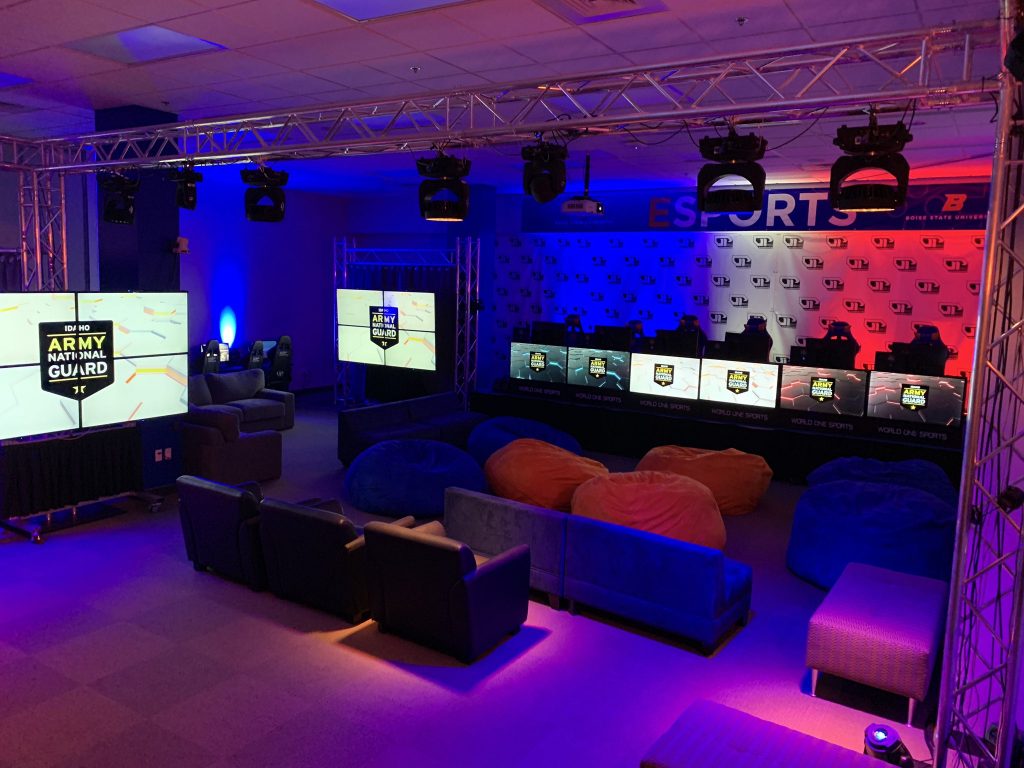 Boise State University has several varsity esports teams including League of Legends, Overwatch, and Rocket League. Teams are made up of 10-16 players, and scholarships are available for incoming and current students. Tryouts take place twice per year, and players are evaluated for their teamplay, communication, and attitude. BSU hosts live events as well as a broadcast Twitch channel. 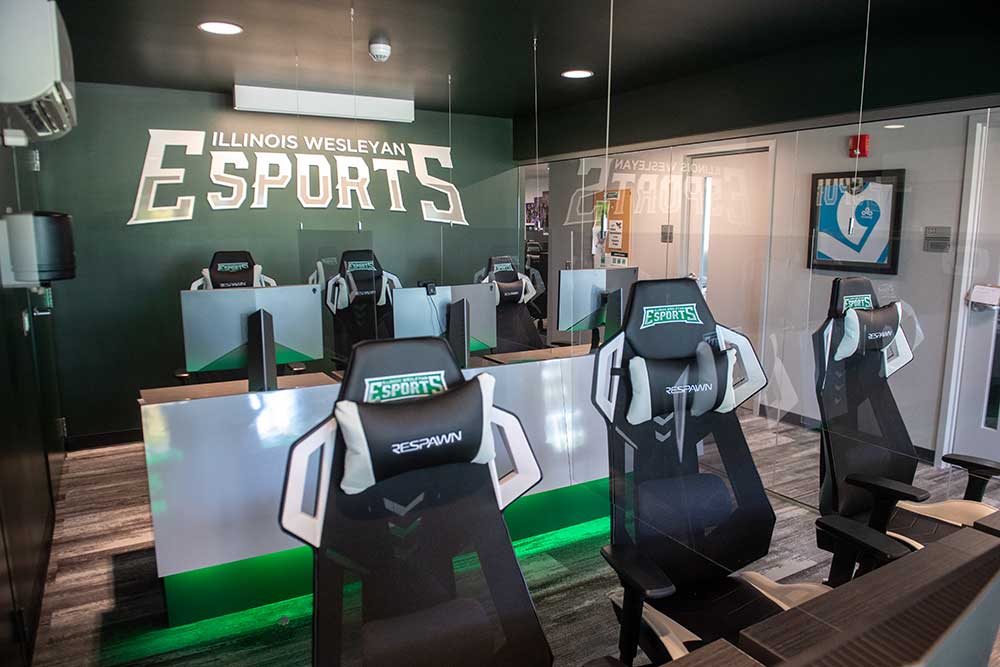 Despite its small size, Illinois Wesleyan University boasts an impressive varsity esports program, with facilities including a competition room and a broadcast studio. Players are expected to practice for up to 20 hours per week with their teammates and coach and participate in tournaments at a national level. IWU offers scholarships for games such as Fortnite, Super Smash Bros., and League of Legends, and has 50 computers in a dedicated gaming facility.

Starting in 2015, the University of California-Irvine was the first public university to offer an esports program. In addition to scholarships and competitions, UCI focuses on building an inclusive gaming community with an annual conference and support for gaming research and academics. Players train in a 3,500-sq.ft. esports Arena with 72 computers and a broadcast station. Other activities include spring intramurals, a Girls in Gaming Summer Camp, and an Overwatch Bootcamp. 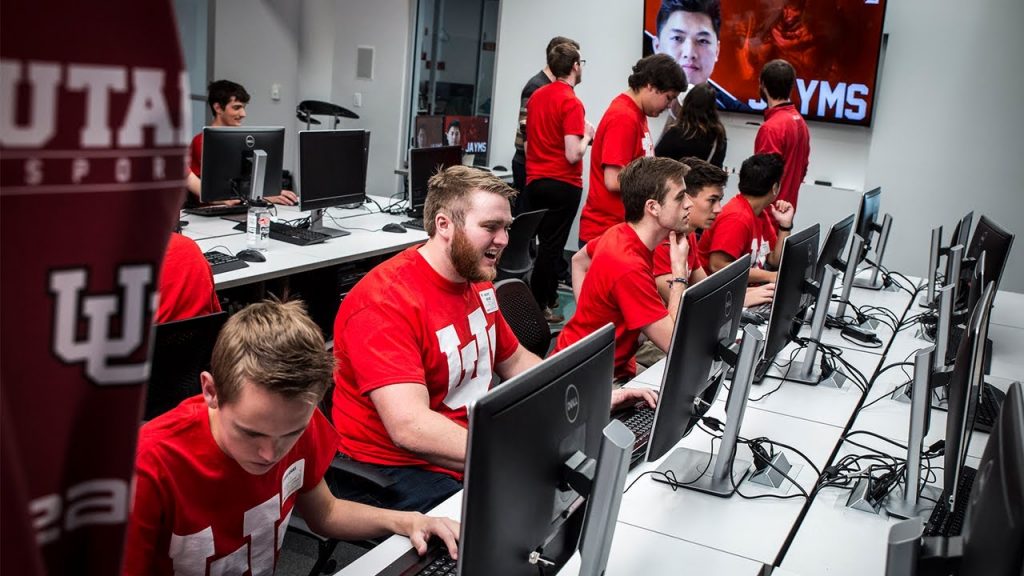 The University of Utah currently has four varsity esports teams: Hearthstone, League of Legends, Rocket League, and Overwatch. They maintain a Twitch channel and Discord group where fans can stream live games and interact with players. Varsity players must be full-time students and have a GPA of at least 2.0 (2.5 if on scholarship). U of U also has an Entertainment Arts and Engineering Program offering a bachelor’s degree and minor in game development.

Miami University’s varsity esports program has been around since 2015, and was the first D1 varsity program in the country. Players have the opportunity to receive physical training, scholarships, and other benefits, and can take classes in Games + Simulation to pursue game development as a career path. The university strives to build a diverse and inclusive gaming community and offers a Junior Varsity program for students who want to compete without the commitment of being on a varsity team.

Maryville University in St. Louis has been developing its varsity esports program since 2015, winning several League of Legends championships. The program focuses on only two games, LOL and Overwatch, but the Community Club maintains teams in several other games in a less competitive environment. Maryville University has several top-tier coaches and a modern training center with a lounge and dining area. 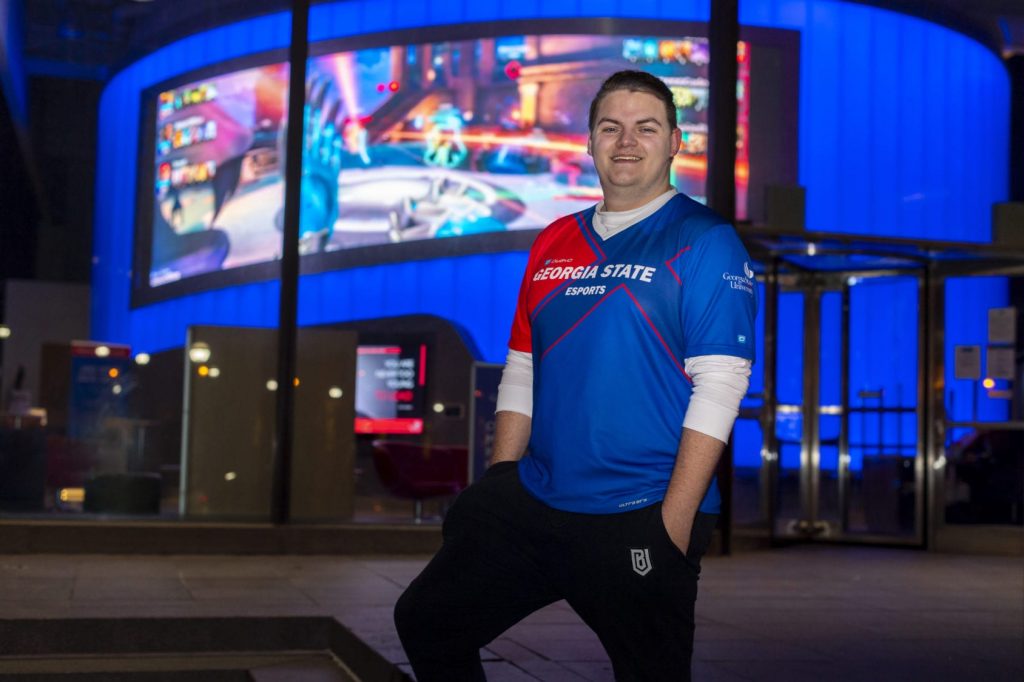 Georgia State University is part of the National Association of Collegiate Esports as well as the Georgia Esports League (GEL), giving players access to both national and regional competitions. Games include League of Legends, Smite, and Brawlhalla, and players are eligible for scholarships if they maintain a high GPA. The program is part of the Creative Media Industries Institute (CMII), which offers classes in Game Design, Media Entrepreneurship, and Computer Science. 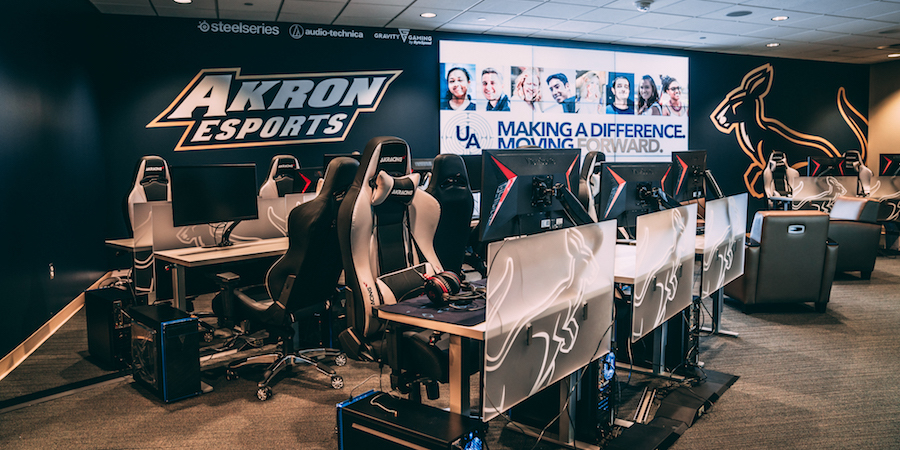 The University of Akron gives gamers multiple ways to get involved with three gaming centers, including an esports arena and two practice facilities. With seven varsity-level teams (including Rainbow Six Siege and Fortnite), the program offers a wider range of games than many other schools. The University hosts an esports summer camp for middle and high school students, and has several gaming-related degrees. 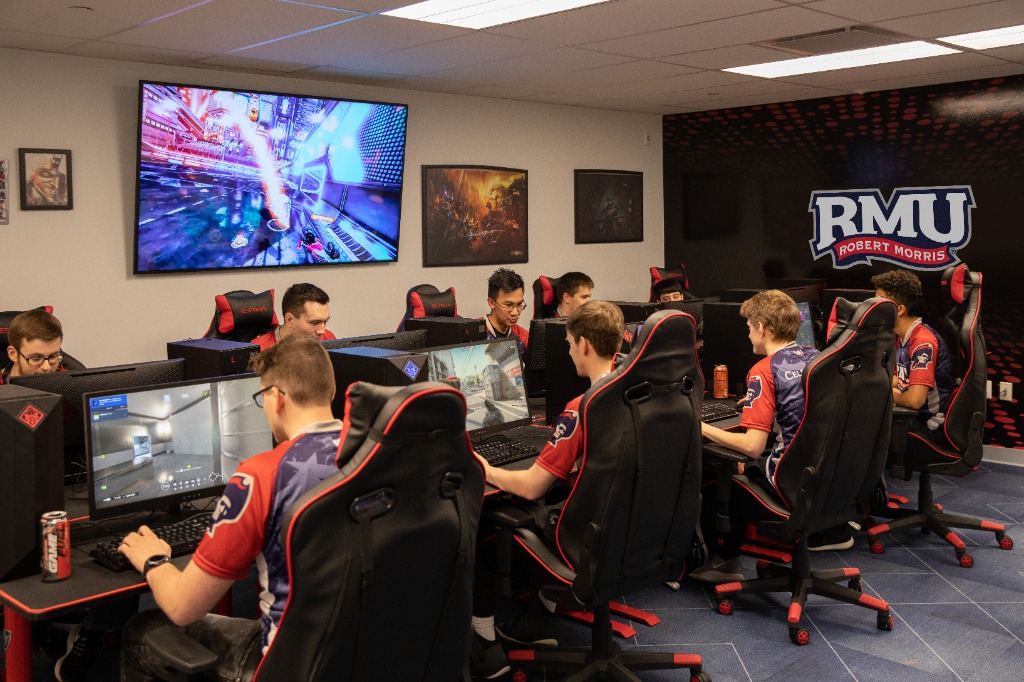 Robert Morris University is located in Pittsburgh, PA, and competes at the varsity level in Overwatch, Rocket League, and several other games. Players get access to top-tier coaching and scholarship opportunities, as well as a dedicated esports training center. The school also offers degrees in media arts, sports management, and other courses that allow students to pair their academic pursuits with an interest in gaming. 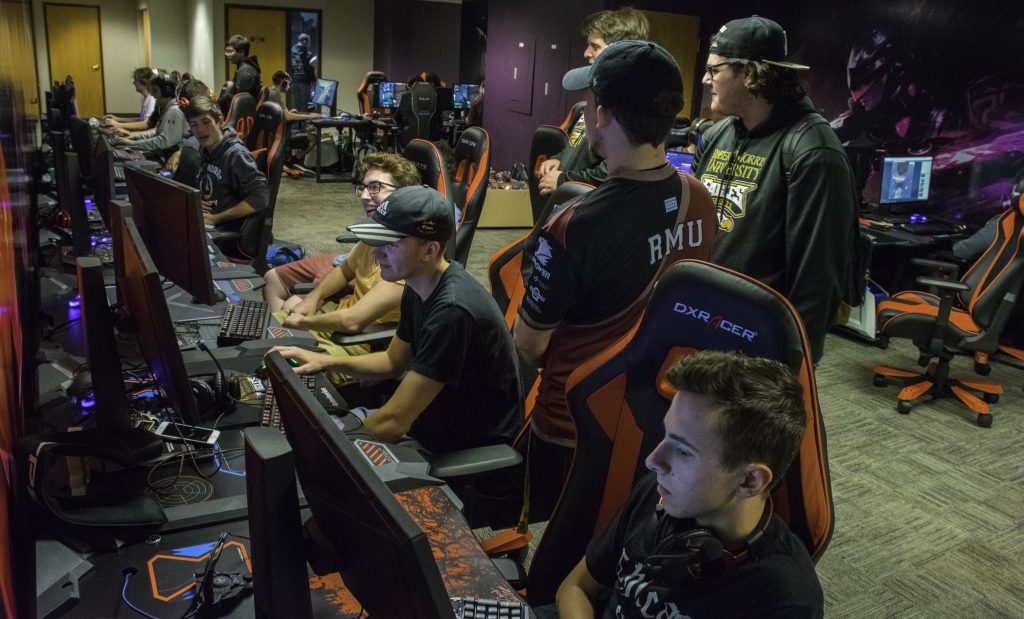 Roosevelt University in Chicago merged with Robert Morris University-Illinois in 2020. Not to be confused with RMU in Pittsburgh, this school also has a competitive varsity esports program that has been around since 2014 and was one of the first of its kind. The program is run by Director Michael Wisnios and features games such as Call of Duty and Overwatch. The program recruits players from all over the world. 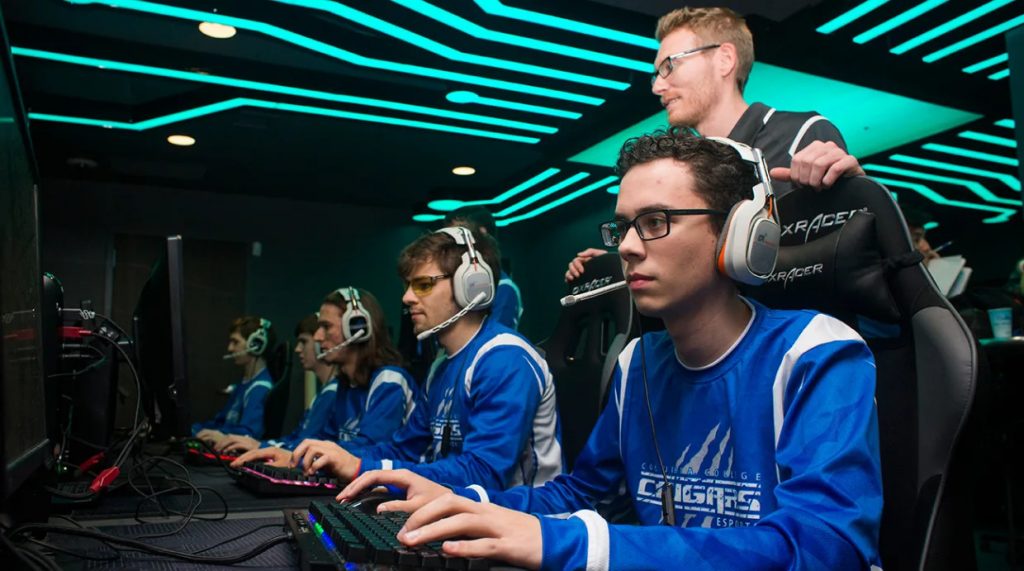 The Columbia College esports program has been active since 2016, with opportunities to participate in national leagues including the Collegiate Star League. The Game Hut is the center of gaming life on campus, with multiple gaming systems available for varsity players and recreational use. The program focuses on League of Legends, and offers an online questionnaire to make it easy for prospective students to get started. 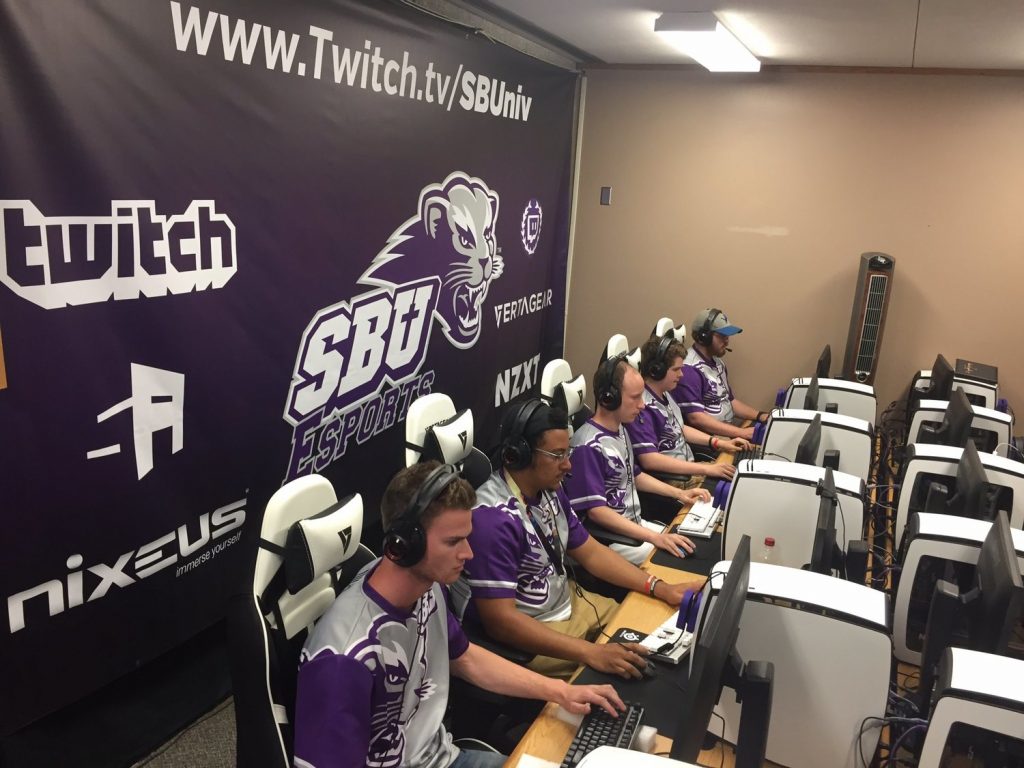 Southwest Baptist University has been welcoming students since 1878, and rolled out its varsity esports program in 2019. Teams play League of Legends, Overwatch, and Rocket League, and maintain an active presence on Twitch, Discord, and Twitter to interact with fans. The program started out with a single Xbox One arena, and has expanded to include hundreds of intramural players and several varsity teams.

University of California at Berkeley 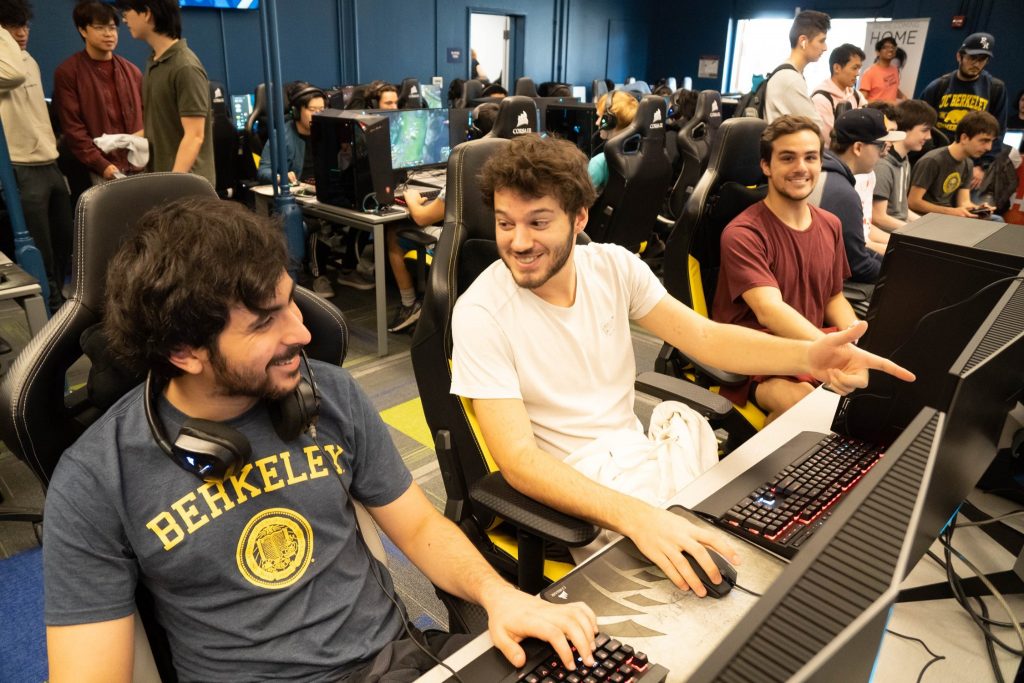 UC-Berkeley’s Cal Esports Community Center features a gaming library, 54 gaming setups, and a live streaming broadcast center. More than 120 student-athletes play in Division 1 and 2 leagues, competing in games such as Rocket League and Fortnite. The program focuses on gender diversity in gaming, and offers several Women in Gaming Initiatives to foster a more inclusive gaming environment. 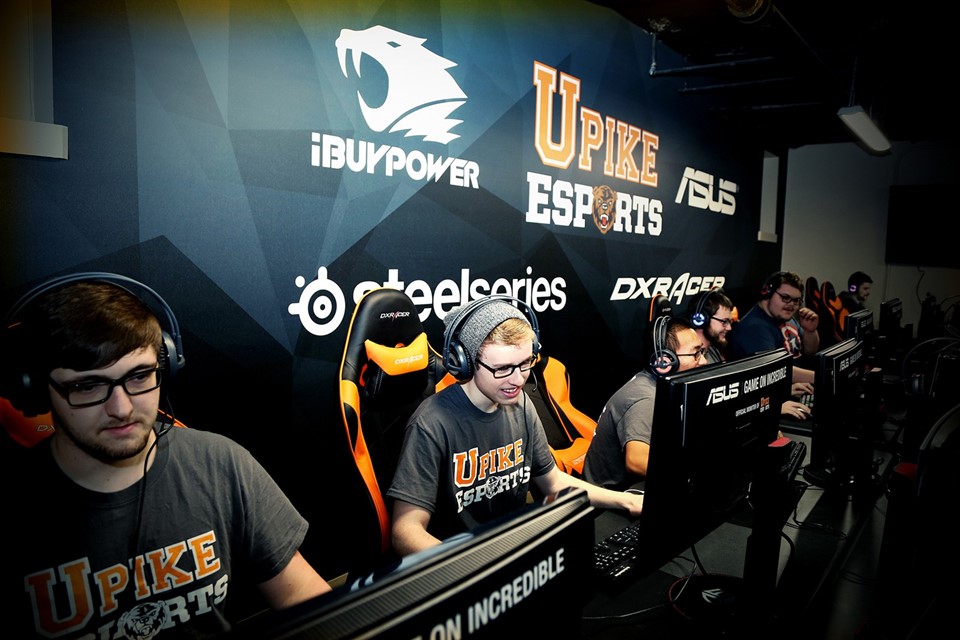 The esports program at the University of Pikeville in Kentucky competes in League of Legends, Overwatch, and Hearthstone. Coach Nicholas Alverson has a degree in the Science of Game Design and operates out of a state-of-the art gaming arena sponsored by brands like iBUYPOWER. Prospective students can apply for a scholarship by applying to the University and filling out an online interest form. 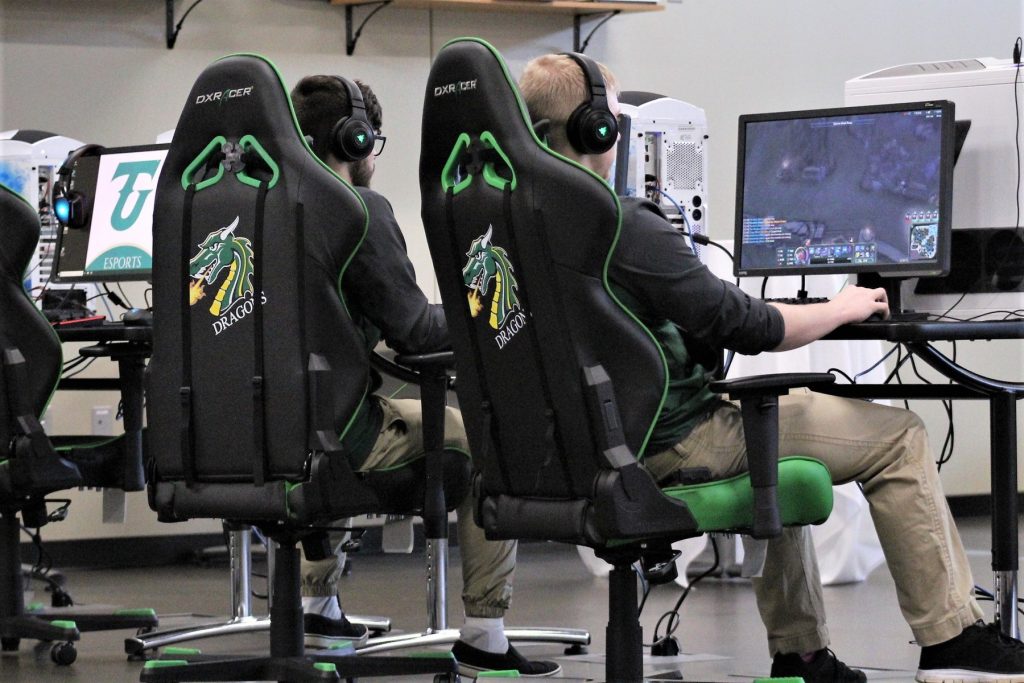 Tiffin University in Ohio has esports covered from both an academic and competitive perspective. Student athletes can compete in a 4,000-sq.ft. arena, playing games like League of Legends and Counter Strike, while those interested in a gaming career can pursue a sports management degree with a concentration in esports management. Tiffin University also offers esports camps for prospective students. 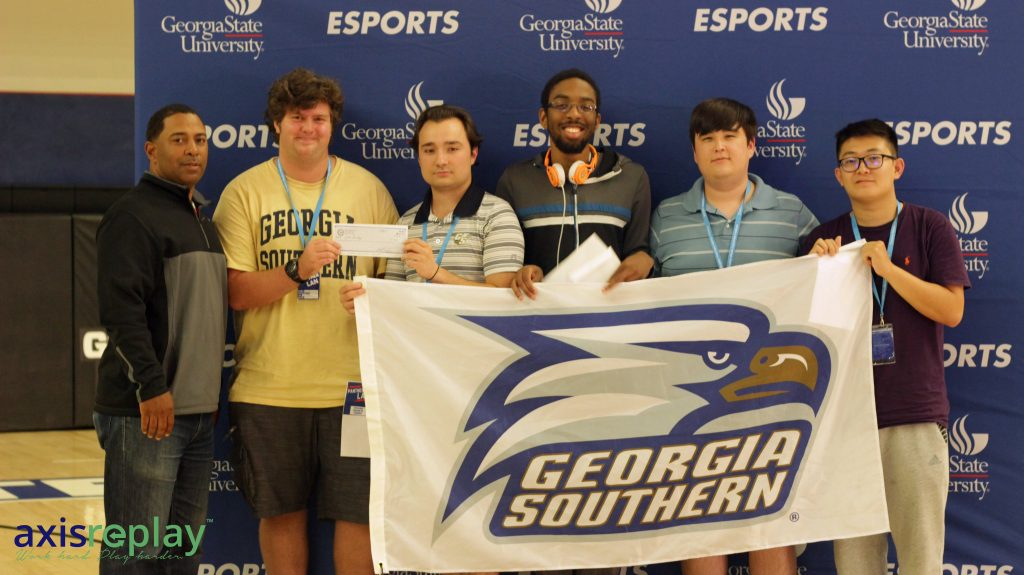 The state of Georgia as a whole is known for its esports programs, including an official high school league. At Georgia Southern University, esports players have the chance to participate in a thriving gaming community. GSU maintains varsity programs for League of Legends, Rocket League, and more. Players can compete in the Southern Collegiate Gaming Association and other regional and national leagues. 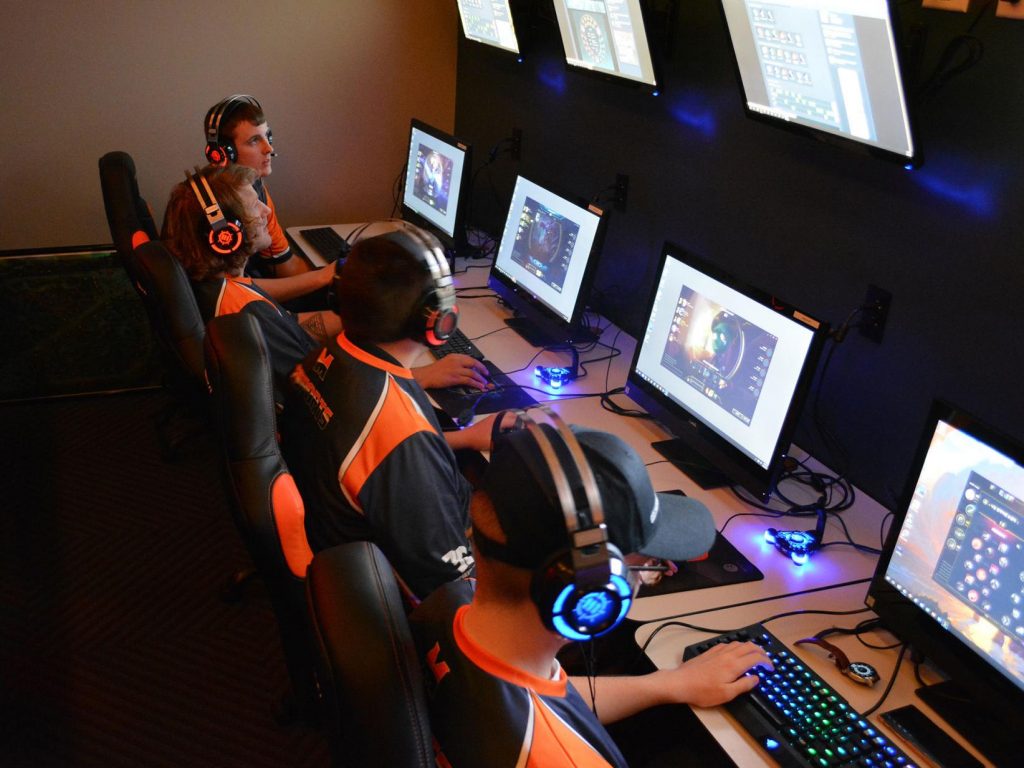 Midland University in Fremont, Nebraska offers scholarships for players of Hearthstone, Overwatch, and League of Legends. Despite its small size, Midland University has an active athletics program, with 33 varsity sports. Esports teams compete in the Collegiate Star League and other regional and national leagues, and have access to experienced coaches and a modern gaming arena. 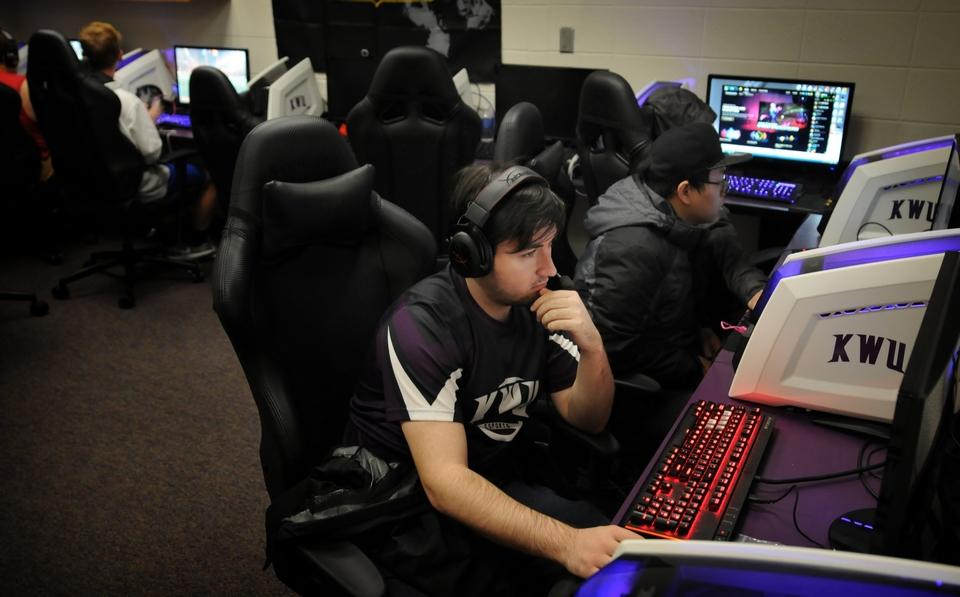 Kansas Wesleyan University in Salina, KS, is one of the smallest schools on this list, with just over 500 students. Still, it has a popular esports program that has been active since 2015 and competes in the Collegiate Star League for League of Legends and several other games. The team has access to gaming PCs and a dedicated gaming center, as well as a Twitch broadcast stream. 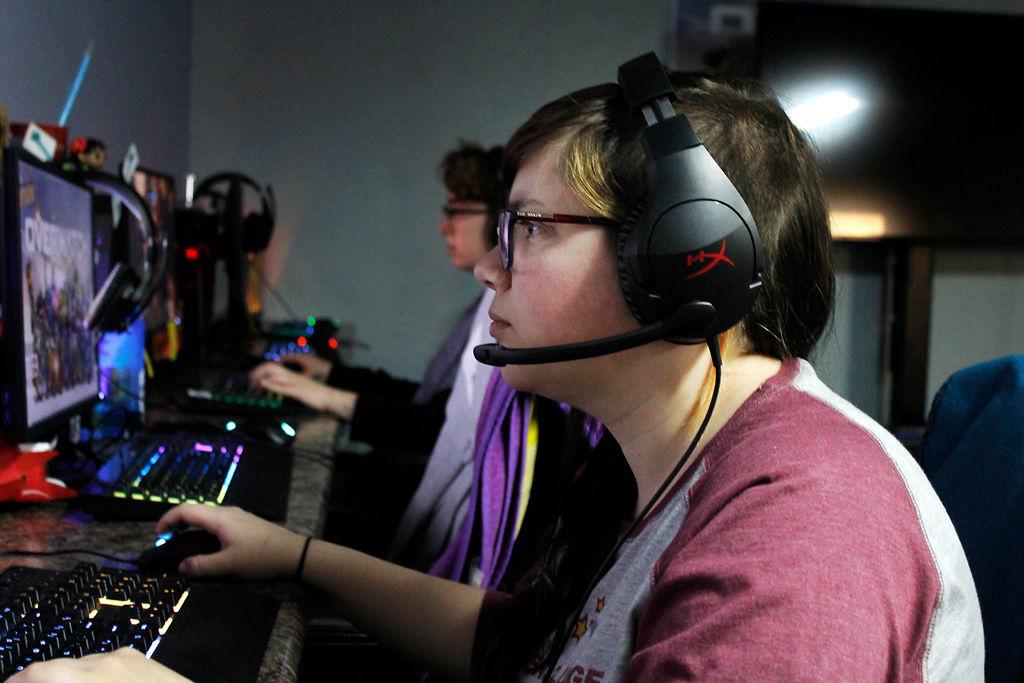 The esports program at Stephens College in Columbia, Missouri, is notable for being the first varsity Overwatch team at a women’s college. It also places an emphasis on inclusivity and welcomes trans and non-binary players. Coached by Adrienne McIntire, the team is a member of the National Association of Collegiate Esports (NACE), and has competed for the Missouri Overwatch Cup and other major awards. 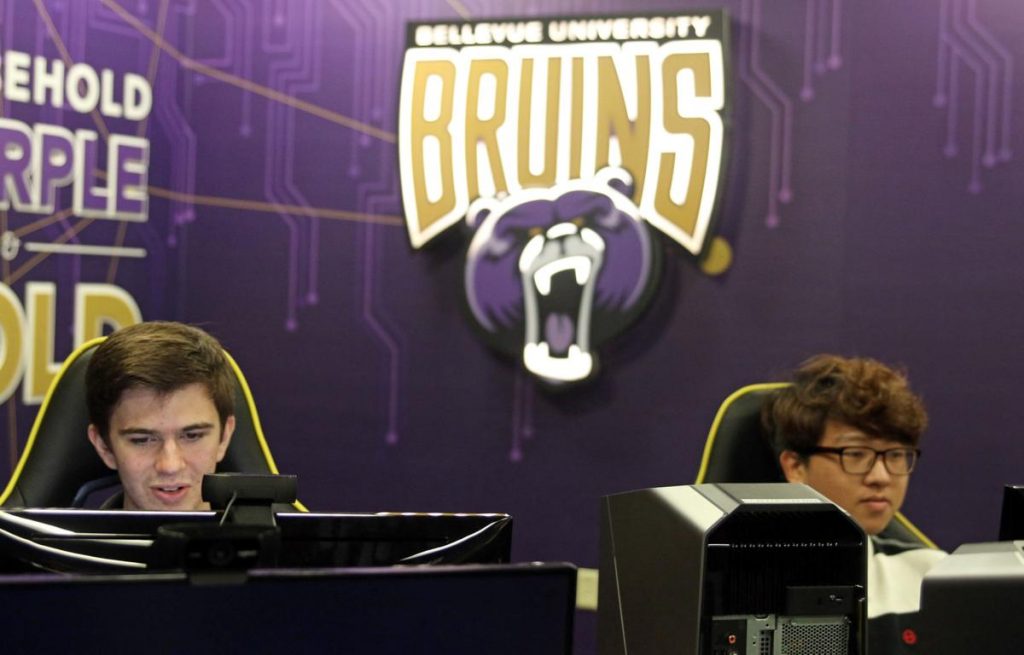 Bellevue’s esports arena, called the “Bruin Bunker,” is home to several esports teams that compete at the varsity level. As a member of the National Association of Collegiate Esports (NACE), Bellevue has taken home championship titles in League of Legends and Overwatch. One thing that sets this school apart is a course called “Fundamentals of Streaming Media Production,” which helps students learn how to create better live streams on Twitch and broadcast esports tournaments.

What Are the Benefits of Varsity Esports Programs?

If you’re into gaming, there are plenty of reasons to consider a varsity esports program, including the social, professional, and academic opportunities they offer. While gaming with your college friends can be fun, playing on a varsity team can open you up to a whole new level of competition. Here are just a few of the benefits to consider:

Who Should Varsity Esports in College?

Varsity esports aren’t for beginners, so in order to qualify for a team or be considered for a scholarship, you’ll need to have some experience with competitive gaming, such as competing in local tournaments during high school.

You’ll also want to think carefully about how much time you’ll have to spend on esports and whether you’ll be able to stay on top of your coursework. If esports is just your casual hobby, then you may want to consider an intramural esports league instead.

For those who are committed to esports, participating in a varsity program can be a fun and rewarding part of the college experience.